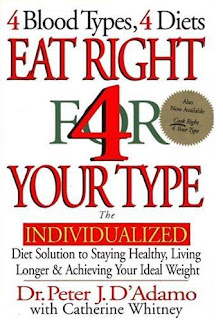 Years before I met my husband, I first discovered the writings and blood type diet of Dr. Peter J. D'Adamo. I had been following a strict vegan diet for slightly more than one year, and was surprised by how consistently unhealthy I had become. I seemed to pick up every single cold, flu and bacterial infection out there... and since I worked as an elementary school teacher, there were A LOT of little germs out there to catch! I was also having a lot more trouble healing than ever before, and had begun to experience endometriosis-like symptoms. To put it simply, I grew exhausted with feeling sick and going to the doctor all the time. During my search for answers and for a key to better health, I picked up "Eat Right 4 Your Blood Type" one day at the bookstore and could not put it down.

As it turned out, my Type O blood type made me a terrible candidate for the vegan lifestyle. I had been avoiding all of the foods that were most beneficial to me - such as meat, chicken, fish and eggs... and eating heavy amounts of pasta, dairy and beans to make up for the calcium and protein I knew I was missing in my diet. Within weeks of re-introducing meat, chicken and fish back into my diet I began to feel 100% better and people were commenting on my glowing skin and healthy appearance. 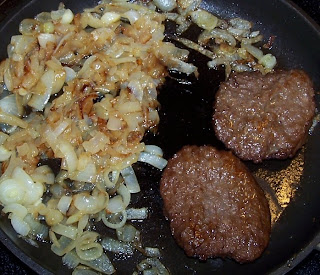 It wasn't until nearly a decade later that I was formally diagnosed with gluten intolerance - but in retrospect, I should have known about that since 1999 when I first began to loosely follow the blood type O diet. If I had followed its guidelines more strictly, I could probably have avoided putting on so much weight with my first two pregnancies, developing my autoimmune thyroid disorder, and having endless troubles with allergies.

Readers of this blog know that since I have embarked on a completely gluten-free diet and lifestyle (coupled with the Type 0 diet) my health problems and issues with weight have totally resolved. Now seven months into my third pregnancy, I remain nearly thirty pounds lighter than I was at the same stage with my second child (when I delivered at sixty pounds over my 'normal' weight). My thyroid remains totally normal, blood pressure is low, and I've had a lot more energy in this pregnancy - despite many other stresses we've faced in the last few months. The baby is growing really well and measures perfectly, despite the fact that I've put on such little weight.

There's just one wee little catch... while one of my children is a Type O like me, my husband and other child are both blood Type A. Does that really make a difference, you may ask? Well, only in terms of grocery shopping and cooking every single meal, every single day. 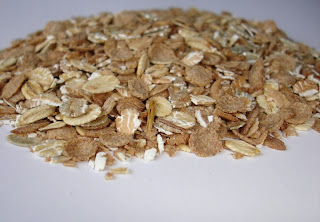 "That's not so bad," one might say... "Surely you must have some common ground!" And in truth, there is a lot of common ground. Fish, vegetables, fruits and rice... we have most of these in common. Still, every meal takes a little extra thought and planning. For example, for lunch today I served one child chicken and peas while the other one ate a peanut butter and jelly sandwich on wheat bread, also with peas. One ate bananas and the other had strawberries. One had mango juice while the other drank strawberry-kiwi nectar. The main problems come up when the two year old screams "I want bananas!" or the four year old whines, "Why can't I have peanut butter too?" They are a little young to understand that mommy is trying to keep them healthy, and that what is right is not always equal or fair.

Sometimes it gets a little wearing to have to cook two different types of pasta for every pasta dinner... or have to explain for the 100th time why I would prefer not to sample my husband's famous (delicious) brussels sprouts in cream sauce. Worse, my husband H doesn't really believe in either a gluten free or blood type diet... so merely planning the weekly grocery list together can be a power struggle of epic proportions. "Kids should drink milk!" he states, and I reply, "Neither of our kids should be drinking milk according to their blood types!" To which he laughingly responds, "Show me the facts! Show me the studies!" (What I wouldn't give to be Mrs. Peter J. D'Adamo at moments like those... so that I would have all relevant facts and studies at my fingertips!)

Still it hasn't escaped my observation that my little Type O who eats grain also has quite a big tummy and a lot of hyperactivity for a four year old... and my little Type A who eats dairy and drinks milk constantly has ear infections and a runny nose. So, today I'm back to fighting the good fight - aiming to keep the peace while also keeping our mixed blood type family healthy. I've posted D'Adamo's Blood Type Diet recommendations and restrictions on our refrigerator, put copies in my purse to refer to when shopping or at restaurants, and am now happily planning gluten-free recipes for next week (like Tarragon Chicken and Sauteed Fish on a bed of Quinoa) that will work for everyone in the house.

Sometimes I think back to when I was a kid and my mom tried to keep us healthy by feeding us wheat bread instead of white bread and vegetables instead of meat. It was a little less complicated back in those days for moms to feed their kids "healthy" food. Oh well - at least now I understand why some of my mom's healthiest specialty dishes (like eggplant with tomato sauce) left my stomach in knots... and I know enough about food allergies to help my children avoid the 'healthy' foods that will make them feel lousy. Is this generational progress? I'll keep you posted.


*Photos courtesy of FreePhoto1.Com
Posted by strivingChef at 3:26 PM 4 comments:

Search for the Answers with Tasty... and Gluten Free!

I believe enthusiastically in the benefits of a gluten free diet but would like to clearly state that I am not a doctor. I do not have the ability to diagnose or treat gluten intolerance, Celiac disease or any other form of food allergy. My recipes and original content should not be interpreted as medical advice, and I am in no way qualified as a medical authority.

I'm just a wife and mother working hard to master gluten free cooking, sharing my experiences and recipes along the way. I hope you will enjoy them!